A Letter from Corporal Daniel West

Mr. Bunnell - Sir:- I take the liberty this morning to address you a few lines hoping they may be acceptable. There is a great desire among the soldiers to hear from their numerous friends at home. No person that has not been a soldier can form the least idea about their feelings in this respect. When the welcome "fall out for mail" is called by the Orderly Sergeant every man in the Company immediately runs to see if there is "anything for me?" and if, as most frequently happens, three fourths their number are disappointed, they are moody and silent. Now this should not be the case. The friends of every soldier should write to him at least once a week. If his relations are too busy to attend to letter writing, that is cannot afford to spend 15 minutes every week to enliven a man who is (besides being a friend,) risking even his life to crush out rebellion and establish that emblem of Liberty, the Stars and Stripes, then let the ladies attend to that business, and I am sure if they only knew what pleasure a "Solger" takes in reading a letter from home, and how much more luster it adds to it when written by a young lady, they would feel more than amply rewarded.

It is with extreme gratification that I acknowledge that we are cared for far better than I ever anticipated when at home. We have plenty of clothing and provisions, and everything possible to make us comfortable.. The tents are quite comfortable, each one has a common size fire place in it which makes the shanty very warm, (when there is a fire lighted in it.)

We receive news from the rebels almost daily by deserters from their army, who come in squads from 20 to 30 each. It appears that they have found out at least that we have room, money and liberty enough for all. Let them come and welcome to our homes and soil, and go in for a change from flour and water, (which is their principal food,) to the rations which Uncle Sam deals out to us down here in Dixie, with which every one is satisfied..- They (rebel deserters) believe in the true American principle, however it may have been overshadowed by their officers. They have already found out there is freedom for all men, freedom of body and soul, of thought of conscience of worship and of labor. They know that our people are put upon a level, and that the poorer class is not scorned by those of wealth and influence.

When this war is ended, should God protect and bring us safely through, we expect to return home to the fond embraces of family and friends and in after years recount the toils and dangers which we have encountered. The little crowd gathered around us will listen with delight to our unvarnished statements of battles fought and victories achieved and not a little will we ourselves be affected by the recollections of all the scenes through which we passed, the daring bravery of our fellow soldiers and the still greater skill of our officers who led us on from one victory to another.

- transcribed by B. Conrad Bush, who may be contacted at Bushresear@aol.com . 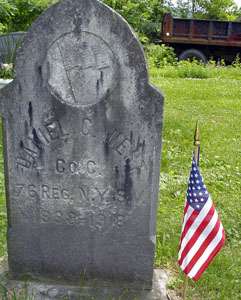 West died in 1918 and is buried in Truxton, NY
Photo courtesy Tom Canfield

Return to Letters from the 76th New York